"A Safe Place to Sleep Every Night" 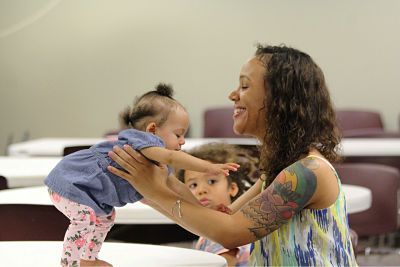 The youngest of nine children, Christina attended private school as a child. Her father worked long hours and her mother struggled to raise a large family in his absence. Her parents' troubled marriage led to an unhappy childhood for Christina. In her teenage years, she started experimenting with drugs as an escape from her dysfunctional family life.

As an adult, Christina earned two associates’ degrees and even operated her own child care center. She remained in a long-term relationship that produced two children and cared for her father in the last years of his life.

A freak accident at work turned Christina's life upside down. She required multiple surgeries to repair fractured vertebrae and had to relearn how to walk. The depression and pain soon overwhelmed her, and Christina spiraled into addiction. She lost everything: her job, her children, and family, who gave up on her. She also lost her self-confidence and self-respect.

A failed suicide attempt was Christina’s wake-up call to start down the road of sobriety and stability. Despite her efforts, she still occasionally found herself homeless. It was not until she entered one of LSS of Northern California’s supportive housing programs that her life really began to change.

“You have no idea what a routine, a safe place to sleep every night, means to me,” says Christina.

LSS provided Christina with a small apartment furnished with essentials. With her housing needs met and with the compassionate guidance of her case manager, Christina was able to rebuild her life and address the causes of her former homelessness. Today, she has a job at the homeless shelter where she landed before coming to LSS and has been reunited with her children, who are now grown with children of their own.